US-based cryptocoin exchange Bittrex has become the first to list LBRY Credits (LBC) for trade to/from Bitcoin. In the first day of trading, LBC went from no established value to roughly 50¢ each! Taking into account all the LBC in existence, this would put LBC's market cap at roughly $200 million – higher than Dash, MaidSafeCoin, Dogecoin (wow!), and on par with Litecoin. Amazingly, some 1/3 of all outstanding Credits were traded on the first day. Visit the LBC Bittrex page here. 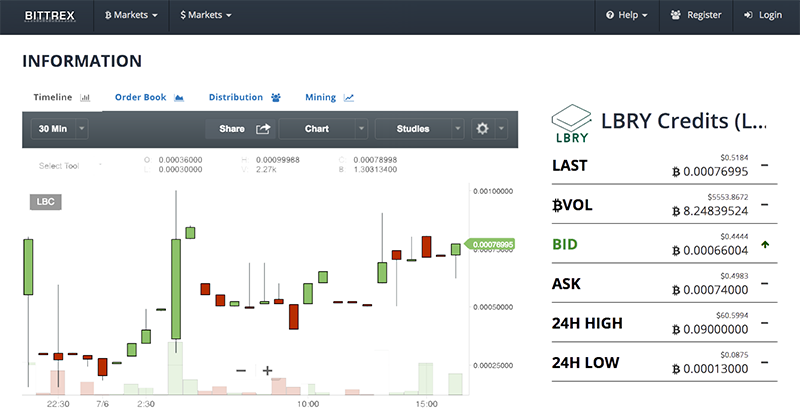 Now before you get too excited, keep in mind that there are very few Credits available on the market. Only about 37K (not including the 400M pre-mined Credits held by LBRY Inc.). This number will increase dramatically as mining ramps up, and LBRY adoption programs are rolled out. Plus new cryptocoins are notoriously volatile in their early days. So there's no reason to believe that LBC will maintain its current value. Anything can happen from here.

But for LBRY, listing on Bittrex is a major milestone in our project. We now have a fully functional beta app, a live cryptocoin that is trading freely on the market, and a growing base of excited miners and users.

Bittrex is one of the market-leading cryptocurrency exchanges, giving its users access to more than 190 cryptocurrencies worldwide. These include both well-established cryptocoins like bitcoin and new entrants like LBRY Credits. Investors use Bittrex to quickly and securely exchange between cryptocoins, as well as to transfer into and out of fiat currencies like the US dollar. Founded in 2014, Bittrex is based out of the United States and complies with all US financial law for both domestic and international currency trading. Bittrex's mission is to "deliver the fastest and most secure trading platform available."

"We leverage an elastic multi-stage wallet strategy ensuring that 80-90% of funds are offline and safe. Additionally, two-factor authentication is required for all withdrawals and API usage. At Bittrex, security will always be a key factor that impacts every development decision we make."

Are you ready to start using LBRY and earning Credits? Click here to sign up for our beta waitlist. We will be sending out batches of invite codes over the next few weeks as we carefully scale up the network. Beta users get 200 Credits just for trying out the app!

If you're interested in publishing original content to the network, email LBRY Curator Reilly Smith, and you may be able to jump the queue!